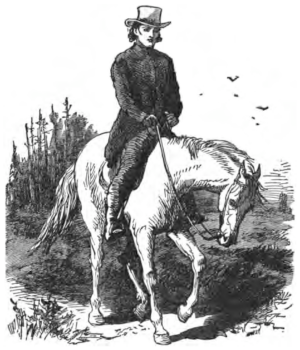 Reverend Timothy Kinson is a strong man of God who claims no denomination, but acts as a circuit rider who goes around to various towns preaching the word of God. Arriving in the village of Sandler, a town near Donville that is somewhat off the trail, but still close enough to benefit from travelers passing through the area. It's in that village that he delivers a prophecy and begins the spread of a message of home to all of Offworld. However, his act of obedience to God ultimately leads to his death as the controllers eventually kill him in hopes of silencing his message, and the prophecy, but only succeed instead in spreading it further.

This is the prophecy that was given by Kinson in the village of Sandler in 403AFR:

"In the day in which the long desired end of this bitter and loathsome race draws nigh upon the threshold, it shall be preceded by a winter like no other. However, it will not be the snow and the cold of that year that will be out of place. Instead, it will be the lack of death that will mark the final days of this race; and our soon rescue from this world. For in that year, no plant, nor tree, or green thing that grows up from the ground, or sheds its leaves and dies upon the coming of winter, shall see death until that season has come and gone; and summer has, again, seen its full course. Every tree will remain green, every flower will bloom and every blade of grass will flourish, even in the deepest and bitterest of snows. In that same day, you will hear word from across the great waters that those, whom block your path and barricade the way, have been removed. At that same time, all who seek to go west shall be drawn; and all who are able and willing shall go. For in that day, a new hope shall arise; and the end of the race will draw near, even nigh unto the gate. This is the word of the Lord."