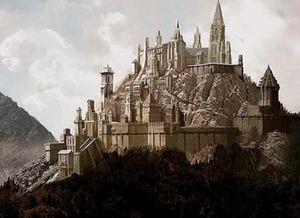 The fortified city of Forlorian is the capital of the kingdom of Venodor, and the chief residence of Queen Narcella, it's ruler, who lives in the central defensive structure known as The White Castle. Forlorian is a city built on a small hill and made up of numerous tiered walls and defenses, all of which surround a tall, formidable castle. It is conveniently located along the southern shore of The King's River and boasts a powerful military garrison that is ready to defend the city at all costs. The city itself is surrounded by fields and farmland nearly as far as the eye can see and is a very resource rich city, and kingdom.