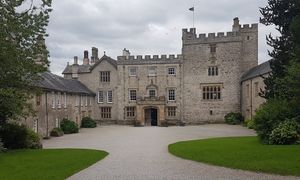 Hollow Manor is a fiefdom located within the Keep of Woes ruled by Susan Wheaton, also known as The Baroness of Hollow Manor, and is numbered among the ten most powerful houses within the Keep. It is also one of only three fiefdoms within the Keep that are entirely or majority Christian in their leadership and employment. It was originally ruled over by an old baron who took in Susan as a young woman with the intention of using her as a concubine. However, when he fell ill, those plans fell through. In time, through the help of God, and her friends, she eventually took over leadership of the manor and became its ruler. She has since then turned it into a Christian evangelical and economical powerhouse, through God's incredible blessing, and raised its status from lower fiefdom to one of the ten greatest in the entire Keep. The goal of the manor and all of its employees, including the other two Christian houses within the Keep, is to continually evangelize everyone within their reach until the Keep is transformed from a den of thieves into a land where God is worshiped in everything they do. The Manor is located in the northeast central portion of the Keep.