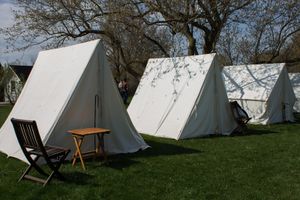 Renata is a newly formed tent city built out of the ashes of Ruby after its destruction by General Amaroth and his army. It is run by the charismatic, yet greedy railroad tycoon Chester Westman and is both a gateway to the lands to the north, and a hub for anyone looking for riches, adventure, or even a new start to life. However, despite being its defacto mayor, Westman does nothing to stop the numerous daily arrivals from staking claims on the ashes of Ruby, and putting up whatever buildings they want as it benefits him in the end. Especially as the city grows and becomes more established, and thus more profitable. However, he does control trade and prices in the area through threats of cutting off anyone, who won't follow his edicts and decrees, from accessing his railroad as it is currently the cheapest way to move supplies and people in and out of the city.