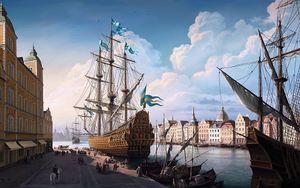 Bremen Te Barro, also known as "The City of Pirates", is a port city bordering the Great Sea, aproximately ten miles north of the racing trail. It is the Offworld equivalent of the pirate stronghold of Tortuga and is host to the Pirate King. It has a regular population of roughly 2-3k residents, not counting sailors, pirates and sea merchants. It is protected by Fort Kastinega, a formidable defensive structure on the northern border of the city. It is also protected by the Pirate King's reputation and his extensive, formidable fleet. Because of this, nobody in their right mind, save perhaps the dragons, would dare to challenge or attack either him, his fleet or the city. Being a pirate town, the city is filled with numerous pubs and Inns that are regularly busy every night. Especially when members of the Pirate King's fleet are in port. The city is partially supported by piracy and trade, and partially by farming and limited amounts of mineral mining. The city is also the home of Captain James Remiru and his famous sailing ship, The Flying Coachman, as well as it's nearest rival, The Puffing Dragon.