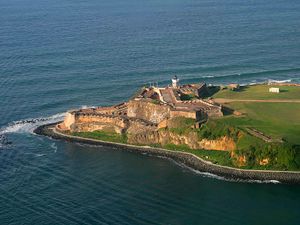 Fort Kastinega is a coastal fortification located along the northern end of the city of Bremen Te Barro and belongs to the Pirate King and is used to defend the city from all hostile attackers. The fort sports an impressive array of 18, 32 and 42 pound muzzel loading, rifled black powder cannons with an impressive range of nearly 3 miles, and typically firing either large caliber steel shot, cannon balls, or the more common quick loading, anti-ship sabot rounds. The fort also is host to three, super large 60lb'er cannons designed to smash even the sturdiest ships. Because of the fort's impressive range of firepower, any ship coming within firing range of the city also quickly falls within firing range of the fort as well, making it impractical and suicidal for any ship to attempt such an attack, even without the impressive ships of the Pirate King's navy joining in the fray and assisting the fort in defending the city. Because of its fearsome and terrifying reputation, the fort has never been forced to fire a single shot in anger from its numerous canons.