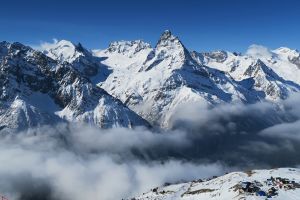 The White Mountains are a snow covered rocky mountain range located at the start of the 4th Hextant and which create a natural land barrier on the continent of Nustrun to all those headed west on the trail of the controllers.

The White Mountains are a series of granite and shale mountains three hundred miles wide and eight hundred miles long that border the land of Venodor, as well as the Great Sea, through which passes the trail of the controllers, creating a natural obstacle for all those who try to cross them. The culture of the mountains is a mixture of Appalachian and Bavarian, and is protected by The Wolves of Ratinar, as well as Maul Ratinar himself. The range of the White Mountains is sparsely populated, dotted along its length with a series of small towns and villages, primarily along the main trail of the controllers, but also in other areas beyond. Unique features of this mountain range include numerous valleys and narrow, deep canyons, as well as a vast and dangerous swamp known locally as The Deadly Slues. Travel through the mountains is dangerous and difficult at the best of times, and nigh on impossible at the worst. The mountains get their name from the snow that so often covers the peaks and the tops of the tallest hills for a large percentage of the year.

The climate of the White Mountains is a semi-temperate, with an annual average temperature varying widely depending heavily on the location and altitude of the landscape within the mountains. These temperature variations range from mild winters and hot summers, to bitter cold winters and cool summers. The average growing season in the mountains is about four months, and supports a wide range of potential crops, including many of the popular cereals such as Barnicorn, Keptlet and Naslet. The average technological level within the mountains ranges from the mid 1800's to the early 1900's with a handful of exceptions that tend to lean towards the more primitive rather than the more advanced. The primary languages spoken in the mountains are English, Dutch, Bonisi and a somewhat adulterated version of Bavarian German, although English and Bonisi are the two most commonly used.