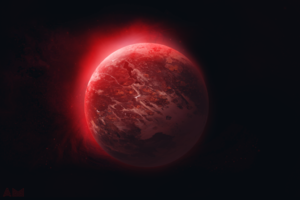 Ember is a small, yet important planet in the chain of worlds controlled by The Syndicate and is used for experimentation of all kinds, including genetic and technological. It is also the birth place of The Dragons of Offworld, The Wolves of Ratinar, and many TEL and biomechanoid species presently living and serving on the planet of Offworld. It is was once an active world in their network of terraformed planets, but has since been abandoned and is no longer in use, even though it still continues to thrive.

The planet of Ember is a Class M, Earth like world that was specially terraformed from a lifeless gas giant, using plants and animals from Earth, and later turned into an experimental playground used heavily by the Syndicate to test and develop a whole range of technologies, alternate lifeforms, and was even the breeding grounds for the biomechanoids that so readily populate a wide variety of other current and former Syndicate worlds. The planet consists of four primary continents, and two polar regions, the rest of which is covered in a vast, fresh water sea. Of the four continents, Prigia is the largest, and most prominent on the entire planet. The other three, of which sit east, south and west of Prigia, are anywhere from one half, to one third the size of the master continent. Also, out of the four continents, it is the least populated, and has become a Sealed Continent due to "The Great Falling" that happened roughly seven hundred years earlier, and which originated on that continent. And, despite the fact that the plague was halted, the Syndicate never returned to the planet, choosing instead to abandon it in favor of other worlds.

The Fall of Ember

Up until the time of "The Great Falling", a super disease that engulfed the entire planet, and drove the Syndicate to evacuate what resources and species they could to their backup planet of Offworld, as well as several others, was one of the three greatest planets of the vast multi-planetary network of inhabited, Terraformed worlds. However, due to the severity and uncontrollable spread of "The Falling", the Syndicate eventually decided to cut their losses, save what they could, and move to Offworld, as well as several other planets. To their great fortune, "The Falling" never followed them, but instead remained on Ember, trapped within the continent of Prigia behind a massive, continental scale stasis field meant to contain the virus, but which ultimately failed to do what it'd been put there to do. Oddly enough, despite the catastrophic, and devastating effects on the planet brought about by "The Great Falling", the extensive and massive purging, and extermination of species and residents on the world actually brought about a sort of renascence, and a revival of the planet, paving the way for a golden age of sorts that purged away the old things of Ember, including the many dark, and twisted creatures created by the Syndicate, and turned Ember into almost a Garden of Eden hidden deep within the cold, lifeless folds of interstellar space.