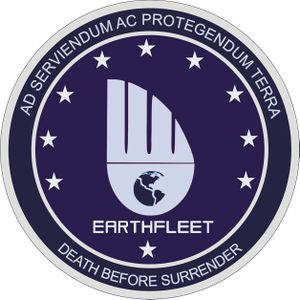 Earthfleet is the military arm of the Brayburn Society and is tasked with the defense of Earth, and all of Sol Sector, but most especially Sol Space. The fleet itself was born in 1807 and consisted of just four starships, one of which was the famous and renounced staship Destiny. It's first Admiral was Edmond Clayton, and it worked in partnership with the Gayik'Von for nearly two centuries to defend Sol Space until it was big and strong enough to stand on its own. It still partners with the Gayik'Von for mutual defense even now. But most of what it does it's able to do on its own. Earthfleet itself consists of two branches of service. Namely an armed "Marine" corps, and the Fleet itself. The Marine element is primarily tasked with special boarding and interdiction activities, ship and facility internal secuirty and defense, limited ground assault, and as security for Society and Fleet officials and officers, as well as visiting dignitaries and diplomats.

Earthfleet's area of responsibility is the entirety of Sol Sector, which is broken up into 8 regions of responsibility, consisting of four regions above the ecliptic plane of Sol Space, and four below, each commanded by an admiral who reports directly to either the Grand Admiral or the Vice-Grand Admiral. The fleet's list of active combat vessels includes numerous Dreadnought's (such as the Spartacus), battleships (such as the Skipjack and the Nova Class), various Frigates and Destroyers, and three classes of Shipkiller, including the Sergenious, Samurai and Pegasus. These are all later replaced by the Raven, Wolfpack and Mythos class starships. These ships are also later joined by the United Sol Fleet and their ships as they take their first steps into space in the years after the incident with Black Orchid during the events of Homeworld in which Earthfleet's existence is revealed to the people of Earth.

Earthfleet was built, and is entirely maintained, as a self defense force with no intentions to grow beyond Sol Sector either now, or in the foreseeable future. And, while it is incredibly strong, it's only purpose is the defense of Earth and all humanity.